Kakistocracy (meaning: government by the worst people, a state or country run by the worst, least qualified, or most unscrupulous citizens) is a participatory *recto verso painting influenced by my own past experience of developing and delivering community arts, Joseph Beuy’s blackboards and Clare Bishop’s Artificial Hells.  The B-Side (initial) painting was informed by the still from the footage of Theresa May’s visit to the Oval office. In particular the frame (which went viral on social media) where she awkwardly held Donald Trumps hand whilst descending a ramp on a state visit shortly after he took office.

In cutting up the 13 male/female symbol pieces and sending them out to artists from across the UK, Singapore and USA to paint a reply to an invite letter on the reverse; I was attempting to respond to our two autocracies using a democratic action. The 13 pieces have been remounted (sewn) back into the painting after re-stretching creating a recto-verso painting and a secret handshake that now sits at the reverse of the new painting.

During critical examination of Julia Kristeva’s theories and subsequent contemporary thought on the thematic of abjection, it has become clear that these ideas are integral to the material methodologies, the phenomenology and the pathos of both my own developing practice and in the art practice of my influences.

* Recto verso – The terms recto and verso refer to the text written on the “front” and “back” sides of a leaf of paper in a bound item such as a codex, book, broadsheet, or pamphlet. 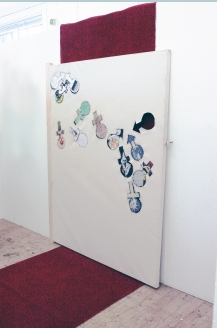 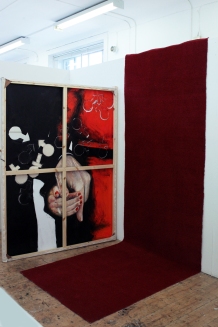 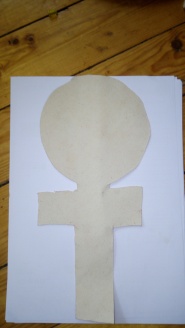 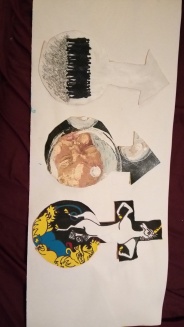 Pieces were painted and posted back for re-attachment by the co-painters (see below for full list of contributing artists).

The pieces were sewn back into place inspired by reading The Subversive Stitch: Embroidery and the Making of the Feminine:

“During 1975, women began exchanging artworks through the post, setting up a visual dialogue about their lives as housewives and mothers. They utilised whatever materials they had at hand and whichever domestic skills they possessed, including embroidery. Monica Ross, a participant summed up the ways in which ‘Feministo’ departed from the competitive individualism fostered by the institutions associated with Fine Arts: “Our creativity derives from non-prestigious folk-traditions. It is diverse and integrated into our lives; it’s cooked and eaten, washed and worn.  Contemporary standards either ignore our creativity or rate it as second-class. We communicate, we don’t compete. We share images and experiences. The posting of one piece of work from one woman to another makes ownership ambiguous. Our creativity is valid.”  (Parker, R, p208, 1984, The Women’s Press)

The whole piece was then hung like a door which when opened reveals both the original secret handshake painting (B-Side) and a steep red carpet which creeps up from the floor over the wall behind the piece and beyond. 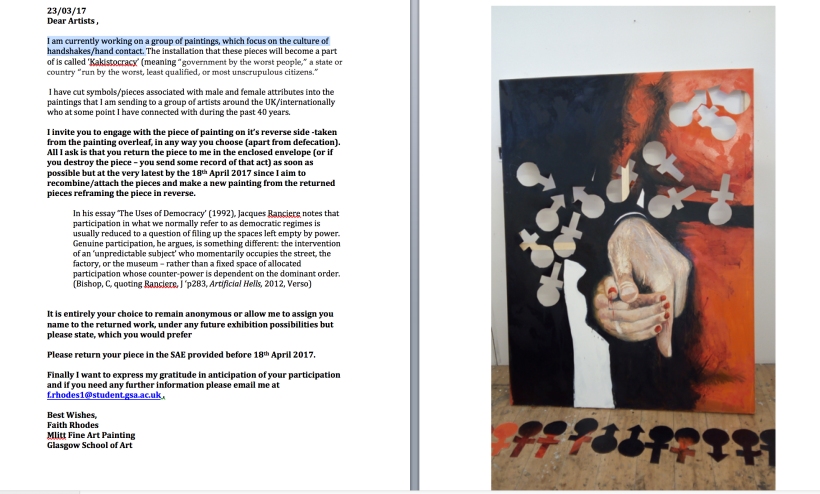